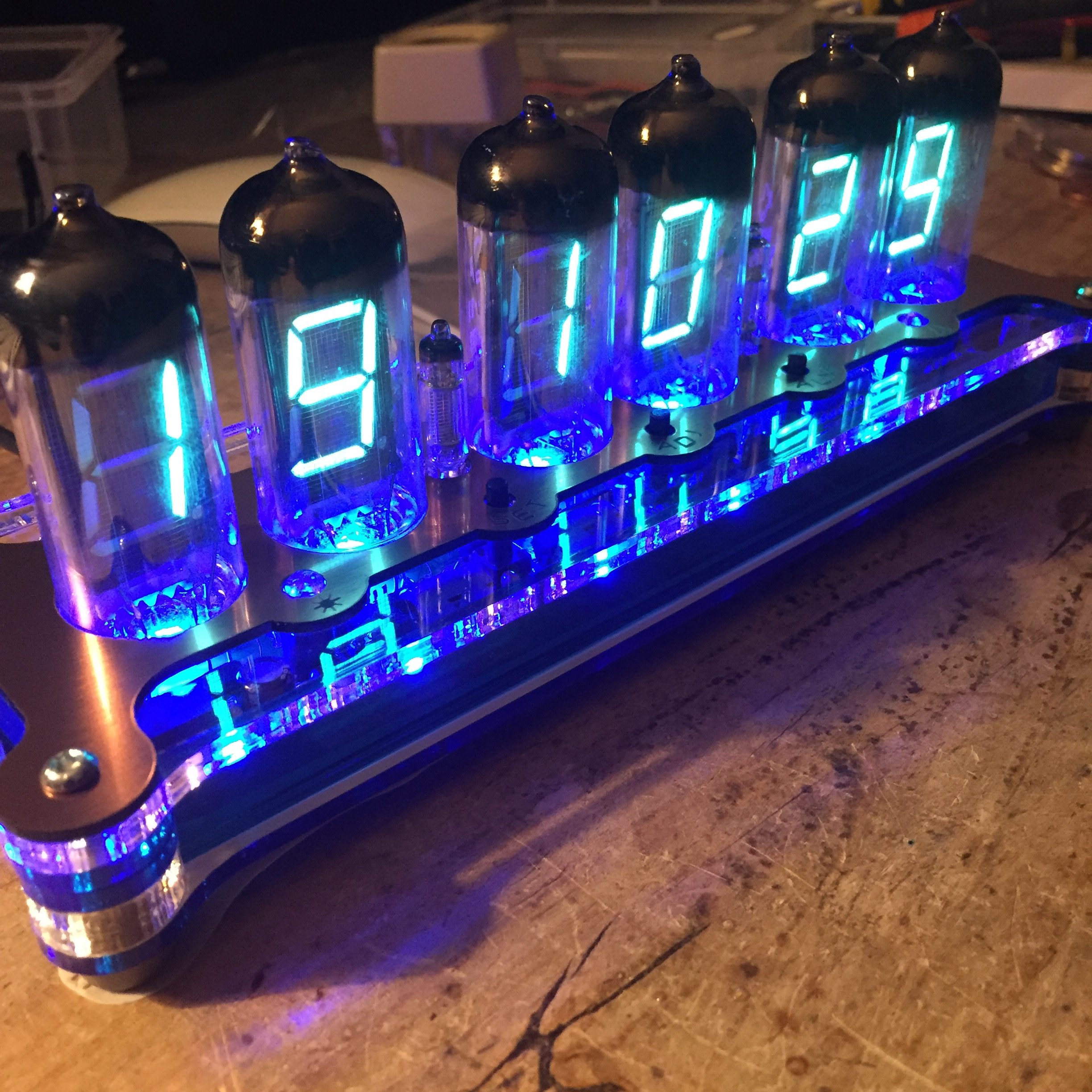 ABOUT THIS USB POWERED VFD CLOCK

Designed around six Russian IV-11 VFD Tubes. With its extra large 22mm high digits and a blue-green fluorescent glow, it is very pleasing to look at and can be seen from a fair distance. Coupled with modern control circuitry, you get this very unique tube clock. No wall plugs just an USB port and you are done.

This particular clock is built to order so expect i’ll need a couple of weeks to built it. Thanks.

WHAT ARE VFD TUBES VS NIXIES?

A VFD operates on the principle of cathodoluminescence, roughly similar to a cathode ray tube, but operating at much lower voltages. Each tube in a VFD has an anode coated phosphor that is bombarded by electrons emitted from the cathode filament. In fact, each tube in VFD is a triode vacuum tube because it also has a mesh control grid.

Unlike liquid crystal displays, a VFD emits a very bright light with high contrast and can support display elements of various colours. Standard illumination figures for VFDs are around 640 cd/m2 with high-brightness VFDs operating at 4,000 cd/m2, and experimental units as high as 35,000 cd/m2 depending on the drive voltage and its timing. The choice of color (which determines the nature of the phosphor) and display brightness significantly affect the lifetime of the tubes, which can range from as low as 1,500 hours for a vivid red VFD to 30,000 hours for the more common green ones.

VFDs can display seven-segment numerals, multi-segment alpha-numeric characters or can be made in a dot-matrix to display different alphanumeric characters and symbols. In practice, there is little limit to the shape of the image that can be displayed: it depends solely on the shape of phosphor on the anode(s).

The first VFD was the single indication DM160 by Philips in 1959. The first multi-segment VFD was the 1962 Japanese single-digit, seven-segment device. The displays became common on calculators and other consumer electronics devices. In the late 1980s hundreds of millions of units were made yearly.

A CLOCK WITH A LOT OF FEATURES

RGB controller with 729 different possible colours for the LED tubes lighting.
Have a different colour of your choice every hour or autochanging colours with variable speed
Programmable temperature display in °C or °F at seconds 30…35
All user preferences stored in non-volatile memory
Circuity works with 46 VDC low voltage from USB (no wall plug 🙂

Thanks to the latest high efficiency voltage converter technologies it is now possible to power Jenny only from two USB ports; similar to an external DVD burner. A SuperCap buffers the clock for more than six hours on power outages.

WHAT WILL YOU GET

There are no reviews yet.

This site uses Akismet to reduce spam. Learn how your comment data is processed.

Payment is easy and secure using our PayPal checkout.
You do not need a PayPal account to use our checkout. 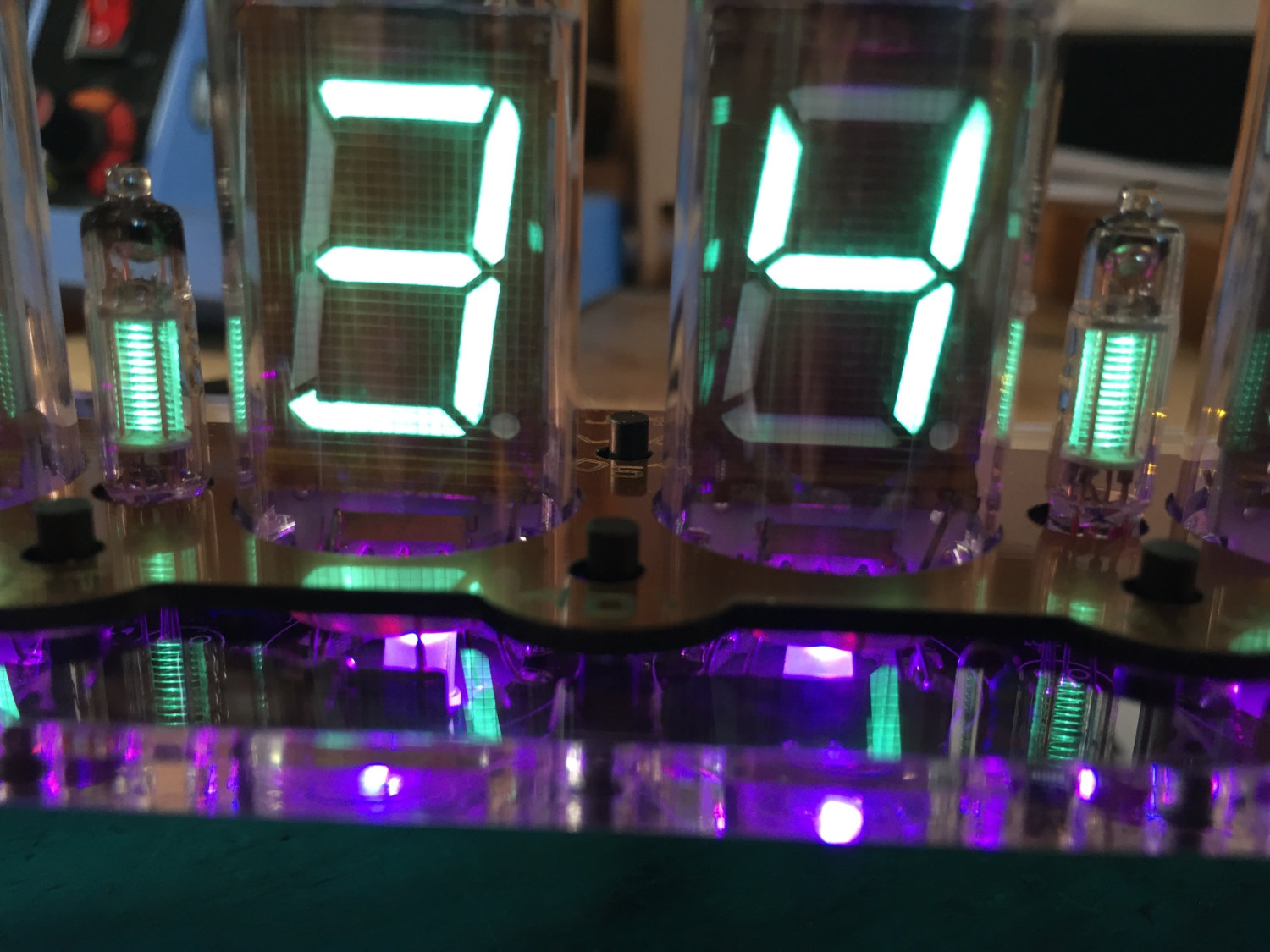